A fascinating collection of historical photographs courtesy of The Reeve Collection, The Otis Historical Archives, National Museum of Health and Medicine, Armed Forces Institute of Pathology.

Preserved human lung specimens similar to these have enabled scientists at the Armed Forces Institute of Pathology to work on genetically decoding the influenza virus from the World War I epidemic (Spanish Flu Pandemic): 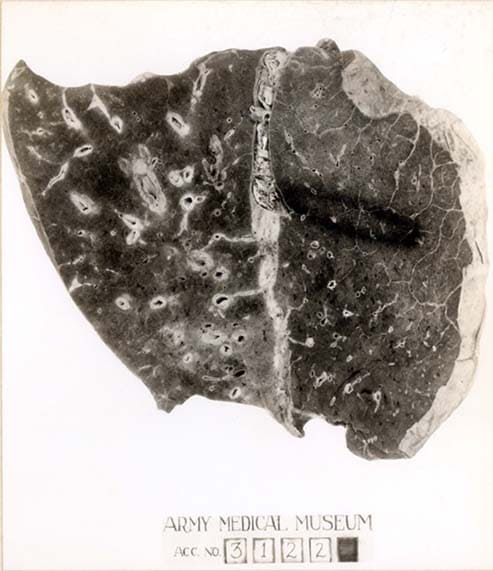 Pictures of human lungs from a collection of images from the 1918 Influenza Epidemic – 1918 flu picture – Spanish Flu.

The Spanish Flu Pandemic, also known as the Great Influenza Pandemic (worldwide outbreak of disease), the 1918 Flu Epidemic, the Spanish Lady and La Grippe, was an unusually severe and deadly strain of avian influenza (bird flu), a viral infectious disease, that killed some 25 million to 50 million people worldwide in 1918 and 1919 — Some experts even estimate that the death toll may have been as high as 100 million. It is thought to have been the most deadly pandemic so far in human history. Could the Spanish Flu return? 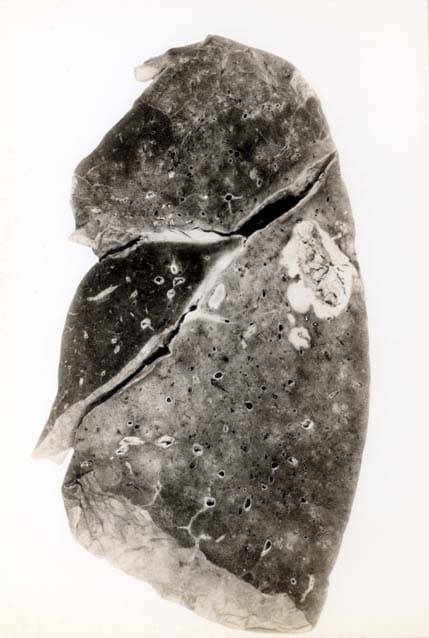 These human lungs pictures are from a collection of images from the 1918 Influenza Epidemic – 1918 flu picture – Spanish Flu.

Now, scientists claim they have found that the avian flu that’s emerging in the Far East shares some of the same genetic characteristics as the flu virus that caused the 1918 flu pandemic.

…Understanding what made the Spanish flu so lethal may lead to new vaccine targets and antiviral drugs that might protect and treat people should the avian flu H5N1 (bird influenza) become a pandemic.

Scientists are building protein-coding sequences of the 1918 virus. Samples of the virus were obtained from the lungs of victims, from the UK and USA.

“Using these materials, we have been able to piece together the entire genetic coding of the 1918 virus”

Study co-author Dr. Jeffery Taubenberger, chief of the department of molecular pathology at the U.S. Armed Forces Institute of Pathology, as published in “Nature”. October 2005 Update