Accurate, current information on Pneumonia and Meningitis and other pneumococcal infections and their prevention by vaccination

According to WHO pneumococcal pneumonia and meningitis are responsible for 800,000 to 1 million child deaths each year. That’s the equivalent of at least one child dying every minute somewhere in the world of pneumococcal disease

Pneumococcal disease is an infection caused by the bacteria Streptococcus pneumoniae. It can affect different parts of the body, including the lungs (pneumonia), blood (bacteremia), lining of the brain and spinal cord (meningitis), and middle ear (otitis media). It can cause a wide range of symptoms and can be deadly, especially in young children and adults over 65 years of age.

Pneumococcal disease comes in several different types depending on which part of the body is affected. Pneumonia is the most common form of pneumococcal disease, causing symptoms such as fever, cough, shortness of breath, chest pain, and fatigue. Bacteremia is an infection of the blood and can cause fever, chills, and fatigue. Meningitis is an inflammation of the membranes surrounding the brain and spinal cord, and can cause headache, stiff neck, fever, confusion, and even coma. Otitis media is an infection of the middle ear, and can cause ear pain, fever, and hearing loss.

People with weakened immune systems, such as those with HIV/AIDS, are more likely to develop pneumococcal disease and its complications. Vaccination is the best way to reduce the risk of pneumococcal disease. Vaccines are available to protect against different strains of the bacteria and are recommended for people at high risk of infection.

Vaccines can prevent the two leading causes of Pneumonia and Meningitis in childhood, Streptococcus pneumoniae (pneumococcus) and Haemophilus Influenzae type b (HiB). Together these infections are estimated to kill more than 1 million children each year.

Bacterial Meningitis kills or disables 25-50% of the children who get it. Highly effective vaccines are available to prevent HiB and pneumococcal infections. However, the use of these vaccines in the world’s poorest countries – where most of the deaths occur – is very limited.

Acute respiratory infections (ARI) are the leading cause of childhood death in developing countries. Each year ARI kills an estimated 1.9 million children – 70% of them in Africa and south and southeast Asia (Williams BG, et al. Lancet ID 2002). In these regions ARI is estimated to account for 19-22% of all childhood deaths.

Most experts consider that the vast majority of ARI deaths are likely due to bacterial Pneumonia (probably 50-80%). When referring to childhood mortality, the term ARI is used to cover a wide range of lower respiratory tract infections including bronchiolitis, pertussis, and Pneumonia, and in some cases, measles-associated illnesses.

Pneumococcus is the most common cause of bacterial Pneumonia in infants and young children. In studies of patients with Pneumonia, S. Pneumoniae is consistently the most commonly identified bacterial agent from either lung aspirates or blood cultures (Shann F. Pediatr Infect Dis J 1986). Haemophilus influenzae also causes a large number of Pneumonia and Meningitis cases in children.

Pneumonia
Pneumonia is an acute illness characterized by fluid in one or both lungs: Alveoli, the air sacs in the lungs fill with fluid, hindering oxygen from reaching the blood stream and the red blood cells.

Meningitis
Meningitis is a condition characterized by inflammation of the meninges, which are fluid filled membranes surrounding the brain and the spinal cord.

Pneumococcal
Streptococcus pneumoniae, also known as the pneumococcus, are bacteria that are frequently found in the upper respiratory tract of healthy children and adults but can also cause a range of infections from relatively mild ear infections to fatal Pneumonia and Meningitis.

Haemophilus
Haemophilus influenzae are bacteria that are commonly found in the upper respiratory tract of healthy children and adults but can also cause serious, life-threatening infections such as Pneumonia and Meningitis.

The leading causes of bacterial Pneumonia and Meningitis in childhood, S. Pneumoniae and H. influenzae type B, are preventable through the use of safe, effective vaccines. HiB conjugate vaccines are safe and very effective for preventing severe HiB infections in infants and children. In large scale clinical trials in North America, South America, and Africa, the efficacy of these vaccines has been shown to be between 80-100%.

Since 1990, more than 50 million infants in the United States have been vaccinated with HiB conjugate vaccines. During this time, the incidence of HiB disease has been reduced by >99% with more than 20,000 lives saved and 200,000 cases of severe HiB disease prevented. For more information on HiB vaccines. 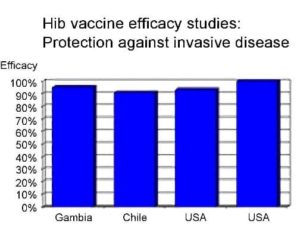